Don't worry, you don't really have a dead pixel on your screen. 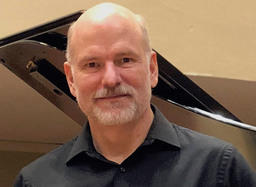 David Rutherford has been involved in nearly every aspect of music – from performing to teaching, conducting to broadcasting.

David has taught public school orchestra programs from the elementary through secondary level in Nevada, Wyoming, Idaho, and now Colorado. During his tenure in Wyoming, Rutherford was selected as a National Teacher Fellow at the John. F. Kennedy Center for the Performing Arts/National Symphony Orchestra in Washington D.C. There he studied conducting with Elisabeth Schulze and Barry Jekowsky, then-Associate Conductors of the National Symphony Orchestra, as well as double bass with Bob Oppelt, Principal Bassist of the NSO. His orchestra program was featured on a national broadcast of NBC Nightly News with Tom Brokaw.

David is in his 9th year as Music Director for Stratus Chamber Orchestra, Colorado’s premiere innovative collaborative orchestra. Rutherford’s vision and ideals of an immersive experience for audience and orchestra within a performance are changing the performance landscape not only in Colorado, but in Europe as well. In the summer of 2017, David led Stratus in a tour of the Czech Republic, where they shared the immersive and inclusive experience with Czech audiences to great delight and acclaim. As a result, the immersive experience has become a part of the Antonin Dvorak Music Festival in Příbram (the home of the Dvorak estate in the Czech Republic), and David has conducted programs there ever since.

Rutherford spent 14 years as an award-winning radio music personality, hosting Sacred Classics as well as being the afternoon voice of Colorado Public Radio Classical. Rutherford was also Music Director of Valor Symphonics Youth Orchestra and for 6 years was a frequent guest conductor and exclusive rehearsal conductor of the Longmont Symphony. He was Director of Orchestral Studies and Music Education and continues to serve as adjunct faculty for Colorado Christian University. David is a graduate of the University of Northern Colorado, with a bachelor’s degree in Double Bass Performance and a master’s in Music Education with an emphasis in conducting.

David is founder and owner of Colorado Highland Tours, a company that offers multi-day, small group sight-seeing tours throughout the Colorado Rockies during the summer months.